In 2007, the GLOBE Foundation proudly led the Endless Energy Project, in partnership with BC Hydro, Day 4 Energy, the Power Technology Alliance, the National Research Council of Canada, and Western Economic Diversification. 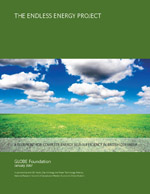 self-sufficient from renewable sources by 2025. The report covers energy use in all sectors of the economy, and energy supply from all sources indigenous to the Province. The main conclusion is that British Columbia could reasonably look forward to energy self-sufficiency in 2025 based on a combination of renewable energy supply, cleaner burning fuels, such as hydrogen and ethanol, and energy use reduction in homes, businesses, and industry and public sector operations.

The Endless Energy project has quantified many energy trends and combined them to show that moving to 100% renewable supply in 2025 is not only possible, it is reasonable in light of increasing concerns about energy price predictability, security of supply and climate change.

Importantly, the scenario implies little disruption in the way people live and businesses operate. However, it does imply a major expansion in economic growth as a result of: increased energy and technology exports, major investments in energy use reduction and renewable energy supply in all sectors of the economy, and replacement of petroleum imports with indigenous biofuels and electricity.

The report concludes that achieving energy self-sufficiency from renewables, or renewables in combination with clean fossil fuels technologies, is practical for British Columbia. Since 80% of greenhouse emissions result from fossil fuels consumption, the effect on greenhouse gas emissions would be dramatic … an Endless Energy economy in action would garner the world’s attention.