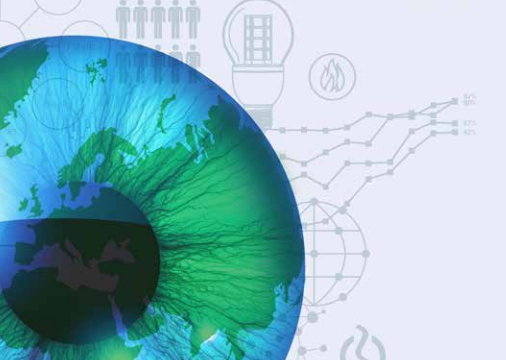 As the world economy and energy use both grew in 2014, renewables continued their rapid rise − but carbon emissions did not.

LONDON, 27 June, 2015 − A significant threshold has been crossed by renewable energy as analysts report that the sectorʼs size last year reached double the level it was at just 10 years earlier.

This expansion happened in a year when the global economy and energy use both grew, but without a matching rise in emissions of carbon dioxide − the main greenhouse gas targeted in efforts to restrain global warming.

The report by REN21, a global renewable energy policy network, says the result is an example of sustainable development. Despite the worldʼs annual 1.5% increase in energy consumption in recent years and 3% GDP growth last year, 2014ʼs CO₂ emissions were unchanged from 2013ʼs total of 32.3 billion tonnes.

Globally, there is growing awareness that increased deployment of renewable energy (and energy efficiency) is critical for addressing climate change, creating new economic opportunities, and providing energy access to the billions of people still living without modern energy services.

The reportʼs authors say this decoupling of economic and CO₂ growth is due to Chinaʼs increased use of renewables and to efforts by OECD countries to promote more sustainable growth, including by increased energy efficiency and use of renewable energy.

Solar, wind and other technologies, including large hydro-electric schemes, used in 164 countries added another 135 Gigawatts last year to bring the worldʼs total installed renewable energy power capacity to 1,712 GW. This was 8.5% up on 2013, and more than double the 800 GW of capacity recorded in 2004. One GW can power between 750,000 and one million typical US homes.

The authors say the sectorʼs growth could be even greater were it not for more than US$550 bn paid out in annual subsidies for fossil fuels and nuclear energy. They say the subsidies keep the prices for energy from these fuels artificially low, encouraging wasteful use and hindering competition.

Christine Lins, executive secretary of REN21, says: “Creating a level playing field would strengthen the development and use of energy efficiency and renewable energy technologies. Removing fossil fuel and hidden nuclear subsidies globally would make it evident that renewables are the cheapest energy option.”

By the end of 2014, renewables comprised an estimated 27.7% of the worldʼs power generating capacity − enough to supply an estimated 22.8% of global electricity demand.

Cities continued to lead the way, setting and achieving ambitious targets and helping to drive the trends of national and regional governments. By early 2015, several jurisdictions had 100% renewable energy or electricity targets in place, with the vast majority of targets at the city/local level. Many municipalities already have achieved such targets.

The amount of electricity available from renewables worldwide is now greater than that produced by all coal-burning plants in the US. Coal supplied about 38% of US electricity in 2013, compared with around 50% in the early 2000s.

Solar photovoltaic capacity has had a rapid 68-fold growth, from 2.6 GW in 2004 to 177 GW in 2014, while wind power capacity has increased eightfold, from 48 GW in 2004 to 370 GW in 2014. Employment in the sector is also growing fast, with an estimated 7.7m people worldwide working directly or indirectly on renewable energy last year.

Renewables represented approximately 59% of net additions to global power capacity in 2014, with significant growth in all regions. Wind, solar PV, and hydro power dominated the market. By year’s end, renewables comprised an estimated 27.7% of the world’s power generating capacity, enough to supply an estimated 22.8% of global electricity.

But REN21 points out that more than a billion people − 15% of humanity − still lack access to electricity, and the entire African continent has less power generation capacity than Germany. 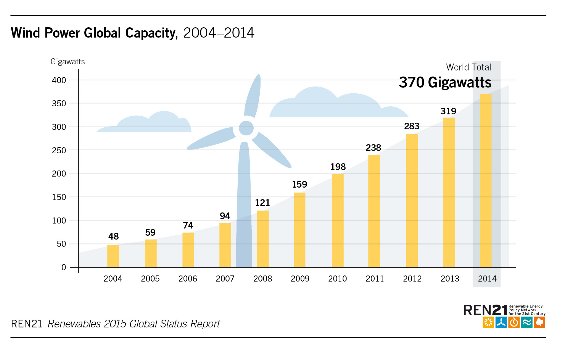 The report says that off-grid solar PV has “a significant and growing market presence”, and other distributed renewable energy technologies are improving life in remote off-grid areas.

However, it stresses that this growth rate is still not enough to achieve the Sustainable Energy for All (SE4ALL) goals of doubling renewable energy and energy efficiency, and providing universal access for all by 2030. − Climate News Network