This is Marc Stoiber’s second story in his series on crafting a more effective investment pitch. You’ll find the first one here.

You would be forgiven for thinking the average person making an investment pitch is living in a bubble.

Most pitches don’t unpack the ‘why’ of their mission or vision. Either you accept them, or (more likely) you don’t. Tweet This Quote

True, she has a solid grasp of what her company does and what it’s going to do in the foreseeable future. In business parlance, this means the mission and vision. But she has no way of explaining how she got to those answers. Or at least she didn’t tell us in the pitch.

If your business is going to succeed, it isn’t simply because you have a damn good product. It’s also because global forces are aligning to make your success inevitable.

Most start-up executives intuitively sense these forces at work when they’re honing their business idea. Unfortunately, when they’re standing in front of prospective investors, they can’t paint the big picture—and their pitch suffers because of it.

If investors don’t understand the forces at play that influenced the vision, they don’t get that sense of inevitable success. Tweet This Quote

He understands that any successful investor pitch envisions a changing world that the pitching company will either help shape or take advantage of. It’s the phenomenon that makes great products feel so perfectly ‘right place right time’.

However, if investors don’t understand the forces at play that influenced the vision, they don’t get that sense of inevitable success. They just see another product. It’s vital that the person making the pitch be able to lay out the global forces for them.

In a speech my company helped craft for John, he tells the story of two Chinese property developers. Both had terrific projects. But only one succeeded. Why?

As John describes it, only one developer took the time to analyze how the world was moving around his project. He saw that workers couldn’t afford to live in the nearest city, and thus they needed affordable housing somewhere nearby. He also understood that the government was running a high-speed rail line to this city through a vast tract of undeveloped property. Therefore, the concept of ‘nearby housing’ shifted dramatically—workers could live much farther away from the city and still commute via high-speed train.

The result? He built his development on inexpensive land far from the city, but he still managed to attract buyers who knew it was an easy commute. His development flourished.

Any investor hearing a pitch for a development on a piece of land far from the city would take a dim view. But if you unpack the global forces—the burgeoning need for cheap housing and the high-speed rail line—suddenly you see a project destined for success.

Give investors a vision they can participate in

Turn investors into co-collaborators, brainstorming with you, by mapping out the global forces behind your product. Tweet This Quote

But describe the global forces that helped shape your vision for that product, and investors suddenly feel themselves transported to the workshop, brainstorming with you. You’ve captured their imagination and engaged them in the process of creating the next great ‘right place, right time’ product.

If they critique your product, it will more likely be suggesting tweaks—not simply the ‘no’ most contestants get in a beauty pageant.

A nice by-product of the process is that the investor internalizes the global forces information you present. It gets them thinking about the forces at play in the world and how those forces will influence them personally.

In one fell swoop, you’ve managed to associate yourself with a very big, very compelling picture.

How to express the global forces

In reality, having a sense of the global forces influencing your vision, and expressing those forces in a way that people understand, can be tricky.

I find it helpful to scan trend-hunting sites (many of which map out trends for specific sectors) to get a sense of how to encapsulate a global force in language that is both easy to understand and captivating to express.

Start your pitch with global forces, and you’ll get investors leaning in. Tweet This Quote

It’s also helpful to brainstorm around global forces with your company team. You all probably intuitively ‘get’ the global forces influencing your company—now it’s time to get it out of your heads and onto paper.

Do this properly, and your pitch will kick off with a fascinating story about global forces at play in your industry—big picture stuff that will get investors leaning in.

Then, all you have to do is thread the needle and tell them how your product is simply the inevitable result of those forces. Investment success, like your product, will become much more inevitable. 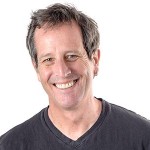