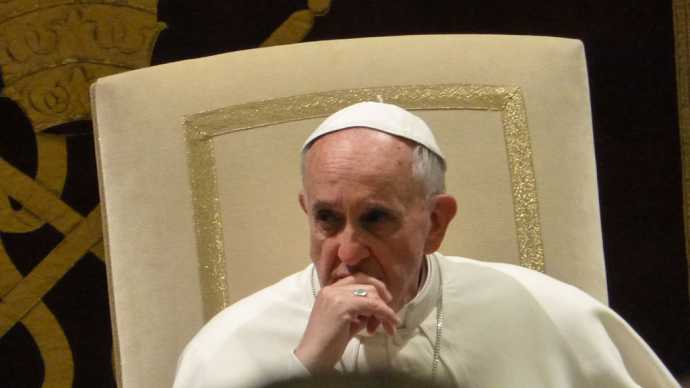 LONDON, 17 June,  – Pope Francis has challenged climate change deniers by declaring that the destruction of the ecosystem is a moral issue that has to be tackled, or there will be grave consequences for us all.

Pointing to human activity as the main cause for the increasing concentrations of climate-warming greenhouse gases, he praises ecological movements – and, in exceptionally strong language, rounds on those who are obstructing progress in the fight against climate change.

“The attitudes that stand in the way of a solution, even among believers, range from negation of the problem to indifference, to convenient resignation or to blind faith in technical solutions,” the Pope says.

His message is contained in an encyclical, a document on Catholic teaching that is traditionally addressed to bishops. But, in this case, he says his words are aimed not only at an estimated 1.2 billion Catholics around the world − they are meant for everyone.

“Faced with the global deterioration of the environment, I want to address every person who inhabits the planet,” the Pope says.

The encyclical − entitled Laudato Si, or Be Praised, and nearly 200 pages long − is the first such document issued by the Vatican dealing specifically with the environment.

It was due to have been released tomorrow, but parts of a draft appeared early in the Italian magazine, L’Espresso − much to the annoyance of Vatican officials.

Unlike many of his predecessors, Pope Francis has shown a desire, since he became pontiff in 2013, to enter into debate about economic and environmental matters, as well as spiritual issues.

“If we destroy Creation, Creation will destroy us – never forget that,” he told a gathering in St. Peter’s Square, Rome, earlier this year.

The Pope says in the draft of the encyclical that the poor are trapped by environmental and financial degradation, and that the world’s resources cannot continue to be looted by humankind.

“Humanity is called to take note of the need for changes in lifestyle and changes in methods of production and consumption to combat this warming, or at least the human causes that produce and accentuate it,” he says.

The impact of the Pope’s message is likely to be considerable. Although the number of church-going Catholics has dropped in Europe and many other parts of the industrialised world, the influence of the church is growing in many areas, particularly in Africa.

“Every community may take from the bounty of the earth that which it needs for its own survival, but it also has the duty to protect it and ensure the continuity of its fertility for future generations.”

The encyclical is also likely to give added momentum to the need for a climate agreement at the UN Conference on Climate Change in Paris at the end of the year.

John Grim, who lectures in world religions at the School of Forestry and Environmental Studies at Yale University in the US, says the Pope’s teachings give a significant moral voice to climate change issues.

He says: “What we have lacked in many settings is the moral voice of religious leadership informing congregations, denominations and different religions of the depth of the science and the impact on human communities of widespread climate change.”

The encyclical is likely to attract criticism from sceptics seeking to deny that there is any such thing as climate change, and who in the past have accused the Pope of straying into areas he knows little about.

Conservatives in the US have branded the Pope’s repeated warnings about growing inequality as the talk of a communist and a Marxist.

In September, Pope Francis is due to go to New York to address the United Nations, and will also speak to the US Congress in Washington.

“The poor and the Earth are shouting,”

Vatican officials say the pontiff will continue to speak out on issues linked to poverty and climate change. – Climate News Network